The Vikings are another team with a litany of needs. They’ve got a good young quarterback, a solid young receiver in Charles Johnson and a promising young safety in Harrison Smith. Also, last year’s big money man Everson Griffen has panned out so far.

They can stand for upgrades pretty much everywhere else on the roster. So why a running mate for starter Xavier Rhodes? Simple, Waynes is a top-10 talent and he’s available outside the top 10. Waynes has ball-hawking abilities, excellent speed to close on deep balls, good man-coverage/press abilities and fits the scheme for the Vikings. He would immediately help solidify the secondary in much the same way that Desmond Trufant did for the Falcons a couple years ago.

Is that you, Richard Sherman?

NFL Comparison: Al Harris (CB, Green Bay Packers)- Man/press corner with fluid hips, shutdown skill traits, physical throughout the coverage and always in position to contest for the ball at the highest point.

Josh Gordon is pretty much a lost cause, no matter how talented he is. Also, did you see how bad Josh McCown was last year with two quality receivers last year in Evans and Jackson? Imagine him throwing to Andrew Hawkins and Dwayne Bowe. Can you win less than 0 games?

Needless to say, the Browns have to start injecting some talent into their receiving corps. Parker fits the range here and provides an all-around receiver who is big-bodied, tall and consistent. Though it might have been nice to grab a lineman here, there’s no pure right tackle that really fits at this juncture. Plus, they have two first round picks, so there might be better options for the range at 19. Parker should step in immediately as a package player and fight for more playing time very quickly.

Parker photo-shopped himself into beating FSU

NFL Comparison: Limas Sweed (WR, Pittsburgh Steelers)- A consistent producer, can get behind defenses but does his best work in traffic, needs more polish as a route runner, uses his large frame to shield defenders and consistently come down with the contested catch.

The Saints, despite what most people are aware of, want to move on from their top sack-specialist Junior Galette. Ray is about as close as this draft has to Galette in terms of pure pass-rushing skill set. Ray is certainly more raw but he’s more pro-ready than Galette was when he came out. I look at this pick as a way to replace Galette, versus an option to pair with him. Though I could be wrong.

Waynes is no longer on the board so no defensive backs fit the range. La’el Collins could be tempting here but this is banking on Payton really wanting to move on from their top pass-rusher who has been in legal trouble recently. We’ll see how that all plays out. Not to mention, Ray is a top-10 talent in this year’s draft so he has very good value at 13. 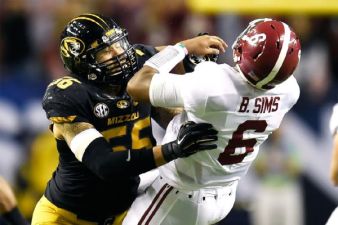 Blake Sims, what a flop

NFL Comparison: Larry English- Strong in the pass rush, with raw, unrefined technique. Adept laterally against the run but struggles when having to play downhill, often washed out of the play by more powerful lineman, also lacks ideal length as a pass-rusher.

The Dolphins spent big in free agency on defense. A lot of their salary cap is now occupied by defensive players and what typically happens in those scenarios is the other unit suffers. The way to avoid this is to inject cheap, young labor into the other side of the ball. Good start with Kenny Stills, but the Dolphins o-line has been a problem since Jake Long flamed out.

La’el Collins instantly adds depth to the line and can likely take up a guard spot very early in his career. I hesitate to say he’s a day-1 starter just because Zack Martin worked out for the Cowboys last year. Remember, he had Frederick (an excellent young center) playing next to him the whole time. I also don’t think Collins is quite on Martin’s level in pass protection. As a road grader with bad intent though, the Dolphins couldn’t do much better.

NFL Comparison: Shelley Smith, G, St. Louis Rams- While not quite skilled enough to stand out as pass-blocker, the push in the run game is highly impressive. Prototypical frame for a flexible lineman, could stand-out as a right tackle later on.

The 49ers need a new defense. They have a few holdover starters and a whole lot of question marks heading into the Tomsula year(s). The biggest problem, arguably, is cornerback where starters on both sides of the defense have left via free agency. This is especially distressing since Culliver and Cox were two of the bright spots on a 49ers defense that really kept the team afloat last year amid all the controversy.

Marcus Peters, talent-wise, fits the range as a top-15 player. He comes with serious character concerns but Perrish Cox had similar issues in his starting role. The 49ers are a team that’s been known to gamble in the draft, and they do it again here at a position of dire need. Peters has scheme versatility and polish like no other corner in this draft. Though he’s not as strong in man as Waynes.

What an on-field distraction

Floor: Flame-out of the league

NFL Comparison: Jonathan Joseph- Not overly impressive size or frame, makes up for it as a feisty defender at the point of attack. Has a nose for the ball and the closing speed and awareness to turn deflections into interceptions.