Heavy penetrator but not very patient, can take himself out of plays and does often. Comparable against the run versus pass, probably a better pass rusher though. Can get washed out by double teams and beaten by talent one-on-one.

Plays like a much smaller man and needs to learn to use his size to dominate, that comes with understanding of pad level. He uses swim, rip, spin and can slide through double teams with ease when pass rushing. He’s also as sure a tackler as there is in this draft.

Nkemdiche is an impressive technician, using a wide array of moves to work his way to the quarterback. His rip and swim moves are his best, but he uses the spin move better than most. He has the abiltiy to slide through double teams with ease or beat guards one on one.

His sack numbers were very strong from the defensive tackle position. He has elite pass rushing ability inside and showed it by being a constant presence in the middle of the pocket.

With his impressive size, athleticism and pass rush moves, there’s no reason to believe Nkemdiche couldn’t evolve into one of the NFL’s most disruptive inside rushers.

While he’s effective at clogging gaps and disengaging from blockers, he gets washed out by double teams due to poor pad level. This will be a problem at the defensive tackle position since he will be asked to take up double teams more often than not, unless he’s paired with another elite rusher. He slides between linemen with more grace than most.

His tackle numbers are fairly on par for the position and amount of games (11) he played in 2015. But what really impresses is Nkemdiche’s ability to wrap up and bring down the ball carrier by himself in space. He is such an effective tackler that an inside position should just increase his value.

The one thing that keeps Nkemdiche from being an elite prospect against the run on the inside is his slightly low play strength compared to his size. He should be able to push his assignment more than he does. Other than that, he has all of the tools and could find a niche as an explosive play specialist. 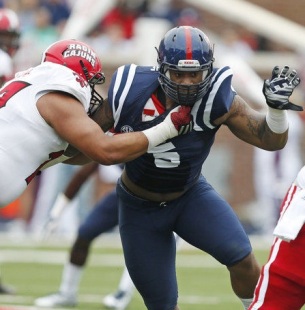 In terms of being a sheer mismatch on the inside with freaky athleticism for his size, Nkemdiche reminds me a lot of Suh. Nkemdiche doesn’t have the sack numbers, but I believe they’ll come at the next level under some NFL coaching.