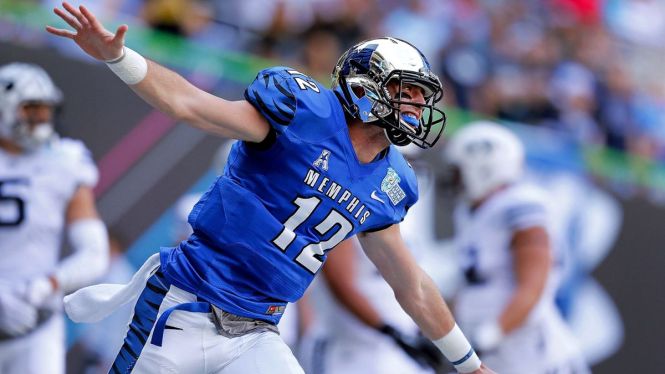 Extreme confidence to go along with his massive frame and height. He uses his size to his advantage as an adequate athlete when plays break down.

His accuracy is excellent on the run, and average from the pocket. He has above-average arm strength and can throw the entire route tree easily. Can unload a deep ball with accuracy and ease.

Does not throw with anticipation well typically, except when on the run. Rarely makes questionable decisions, often doesn’t bother pushing the ball downfield, relying instead on his receivers to gain yards after the catch.

Can diagnose and read defenses, but will need to refine that part of his game, as well as his footwork, at the next level. Not a day 1 starter, no matter how you slice it.

Misses most often on intermediate throws in traffic from the pocket. Really struggles hitting his receiver in stride on moving routes, forcing his receivers to make the adjustments. Has solid accuracy on deep balls and is excellent on short throws.

His arm is more than adequate to throw an entire route tree. It’s not transcendent however, he doesn’t have the arm of a Rodgers, for example.

Lynch is one of the rare QB’s whose game elevates when he’s scrambling. On tape, he made some impossible throws between double and triple coverage.

Lynch can take all sorts of forms throughout a game and from game to game. He can be a running qb that forces it to his first option one week and a pocket passer that launches bombs behind strong o-line play the next. He usually plays well though, regardless.

Reads defenses better than most QBs outside a pro offense, still he could stand to improve in this area, he’s too content to check it down.

Outstanding athlete for his size, and usually transfers that into being an effective scrambler. Keeps plays alive far longer than they should be with his pure ability.

Pocket awareness: 3 out of 5

Might get him in trouble at the next level, Lynch isn’t great at working the pocket and will sometimes bail completely. He’s not as bad as some option QBs at this though and has shown a comfort level when the blocking is strong consistently.

Lynch had a fantastic 2015 season, he had several big moments leading Memphis to a 9-3 record and handled the pressure of being in the national spotlight. Until the bowl game, he looked rather ordinary posting a stat line of 16/37 for 106 yards, no touchdowns and one interception. That’s concerning, but there’s no reason to suggest it wasn’t an outlier.

Not always at his best late in the game, Lynch is more of a game manager and doesn’t really rise to the occasion.

Lynch is massive, and he uses that size to his advantage to keep plays alive and see over the head of his lineman. NFL teams will covet his sturdy frame. 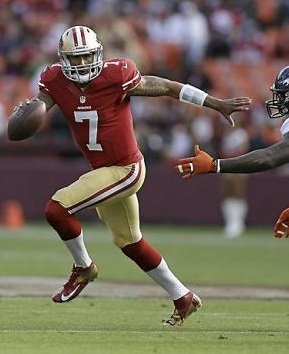 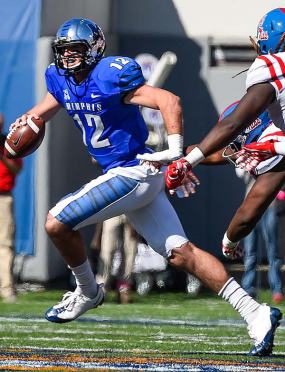 Both jump off the tape for their sheer size and speed. Both struggle with their accuracy and thrive on the run. Both tend to get stuck on their first read and struggle on crossers, ins and outs. They’re nearly identical, except Kaepernick has a stronger arm and is a better runner and Lynch tends to make better decisions.