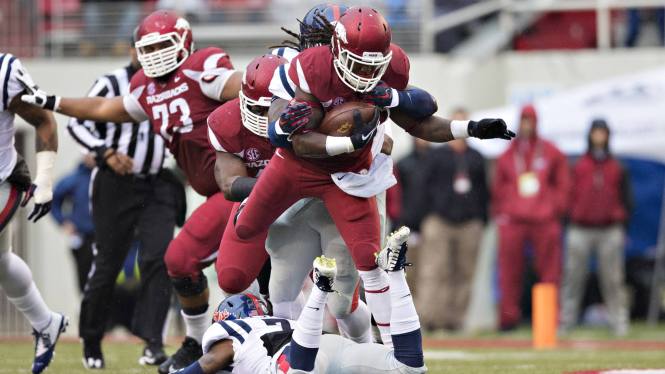 Collins has quicker feet than most running backs ever will. His change of direction ability is automatic and his stop-and-start movement jumps off tape.

He is quick, agile, has adequate burst for longer plays and brilliant vision to set up his blockers. He benefited from running behind an exceptional Arkansas offensive line headlined by top-NFL-prospect Guard Sebastian Tretola.

Still, when it came to contact, Collins seeks it out and hits with a ton of power and aggression. When he really gets going, he lowers his shoulders and plows through contact with the best of them. This is especially impressive considering his relatively low weight.

He’ll probably have to bulk up a bit for the NFL but it’s all well-distributed.

Collins can get around the edge or downhill quickly and with speed, but he can get chased down by linebackers or slower safeties from schools with more talent. He had his most special games against lesser competition for the most part.

He’s a guy that seems to love getting hit and delivering it right back. While he has nifty feet, once he chooses his direction, he’s like a runaway freight train.

Collins’ field vision was consistently a defining characteristic on his successful gains, he would weave in and out of several lanes using the entire field at his disposal like few others can. He has traits of both a north-south and lateral runner and can do both effectively, often in the same run.

Has some absolutely insane moments in this regard, a few times against Tennessee he was forced parallel to the ground with all of his weight forward and still managed five extra yards and a first down. Shows this same impressive ability when stopping and starting as his momentum doesn’t carry him forward and he’s able to get going immediately rather than lumbering.

Collins shows impressive ability in this area of his game, he can carry several tacklers several yards if they don’t hit him with good form. He’s stronger with good pad level and as a result, when he’s deep in the secondary, he’s easier to bring down since he runs a little too high.

Everything is utilized in Collins’ game, and with the expertise of a wily vet. His feet are so quick that his spin is almost as quick as his juke and he uses the hurdle against opponents’ tendencies to try to chop his legs in the open field since he’s such a tough runner to bring down.

He wasn’t asked to do this much at Arkansas but if his pass blocking skills are any indication, he should at least be adequate.

Collins runs the screen well, but that’s about it. Still, most NFL teams probably won’t ask much more of him, and even if they do, he has the traits to develop well in this aspect (quick feet)

He had 13 catches in his senior season, so there’s just not enough data to make a solid determination. I have it somewhat low because I saw a drop on the only pass that went his way in the tape I watched, though it was well-covered.

His 13 catches in his senior season went for only 95 yards, that’s an average of 7.3 yards per catch which was the highest of his college career by almost two yards. He has the traits to be explosive but it just didn’t show up while he was at Arkansas.

He didn’t run very many routes, but when he did, he was active and effective in attempting to give his receivers running lanes.

Collins uses his compact frame to be very stout at the point of attack and rebounds most rushers with ease. He shows good recognition skills and rarely gets out leveraged.

There were no issues with his pass protection on tape.

He shows the ability to use his slight lack of size to his advantage and should continue to be stout on the next level. 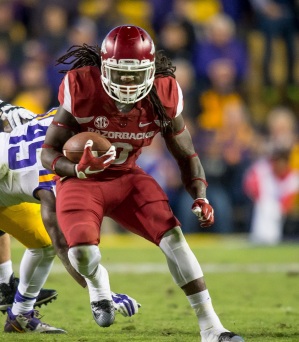 Runs with a great mix of brute strength and nifty movement skills. Possesses the necessary burst to pull away from defenders in the open field and balance to stretch gains far beyond expectation. Williams is a more accomplished pass catcher, but everything that makes him effective in that role, Collins seems to possess.