The Cowboys really like this guy, but I can’t really understand why. He’s an all right receiver and an all right blocker.

I don’t see why they’d pay much more than the vet. minimum for him, he’s a third tight end, nothing more.

At almost 3 mil a year, that’s a strange place for the Cowboys to place their resources.

Claiborne was a special player in college. Those skills just have not translated to the pro game, where he’s struggled both to stay healthy and to play well when healthy.

Cowboys fans especially will remember Claiborne for giving up a long touchdown in Austin Davis’ first start with the Rams in 2014. He graded out poorly again this year, leaving questions as to whether he’ll ever really turn the corner.

Still, he’s 26 and hasn’t yet had a complete season. I think he needs a change of scenery, but maybe something will click here, and if so they Cowboys would obviously be getting a bargain at 3 mil a year.

Wilber is still young, but it’s not likely he’ll ever be anything more than just a decent backup.

I don’t understand this contract. It’s heavily incentivized so it’s not the worst thing ever, but it doesn’t make much sense why they’d pay a guy when they could get similar production off the street for the vet. minimum. 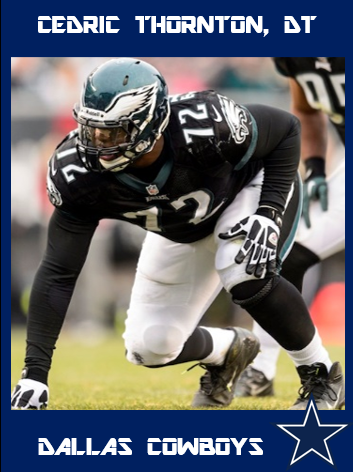 Here’s what I like about this: the Cowboys are addressing their needs so they can take the BPA at 4 overall.

Here’s what concerns me: Thornton hasn’t really ever produced at a high volume and he’s 29. Paying over $4 million a year is a little much, but it makes sense considering he’d easily become the most talented d-tackle on the roster.

It’s not close. It’s also smart to take him away from a division rival.

I’m tempted to give this a higher grade, but my main issue is the Cowboys are once again gambling that only they value McClain.

That seems insane to me, as he’s developed into a premiere run-stuffing linebacker, with enough range and instincts to hold up in coverage. His skill-set should be majorly coveted.

His off-field issues don’t seem to affect his on-field effort or character and his injury concerns are only minor.

The Cowboys need to lock him up long-term, soon, while he’s still cheap.

One thought on “Cowboys Free Agency 2016”