Carrol was definitely the Eagles best corner last year, and perhaps their best player in the secondary behind Malcolm Jenkins. He’s stout in coverage and can play at an above-average level for a CB2.

He shouldn’t regress through this year, so he provides a quality option at starter at a very modest price. This is excellent value, and he should fit right in to Schwartz’ scheme.

I understand what fueled this trade: necessity. The Broncos simply have no options at QB. Sanchez isn’t a great one, especially going to a new system.

He’ll still be the same inconsistent, inaccurate player he’s always been. It’s not the worst move, but there’s nothing really inspiring about it.

For the Eagles though, this is a coup. Sanchez had no place left on this team, and they actually might get something out of him. Brilliant trades by the Eagles this offseason.

For the Eagles, this is another great job of getting rid of an undesirable contract, only swapping fourths is a little disappointing considering Murray was the league’s top rusher just two years ago and one year into a 5 year $40 million contract.

Still, Murray was a malcontent, so it’s good for both parties to move on. The Titans receive a back who is likely motivated to prove his detractors wrong so I could see this working out fairly well for them, and they only dropped 13 spots in the 4th to do it.

There is the possibility that Murray really isn’t the same back, considering his injury issues, heavy wear from the 2014 season and the fact he won’t be running behind  an incredible offensive line like Dallas, but Tennessee will scheme their running game for Murray, so he’ll be in the best possible position to recapture the magic.

For me, this is a deal that could pay off greatly for both sides.

I imagine there wasn’t anyone at 8 the Dolphins had strong convictions of, so they’re ok to move back and pick up some pieces. Kiko Alonso, when healthy, is an excellent young inside linebacker, he reminds me of Sean Lee. The Dolphins had nothing close to that at linebacker before.

Byron Maxwell also came on for the Eagles last year late and ended up with a decent season overall. He’ll certainly be an improvement over old, bad Grimes.

The Eagles, meanwhile, dump a fairly insane salary with Maxwell and the regime further cleans their hands of the Chip Kelly era, for better or worse.

Moving up in the draft a bit just sweetens the deal. It’s better compensation than I was expecting, but it definitely opened up some holes on the roster which is why I’m not giving it an A. 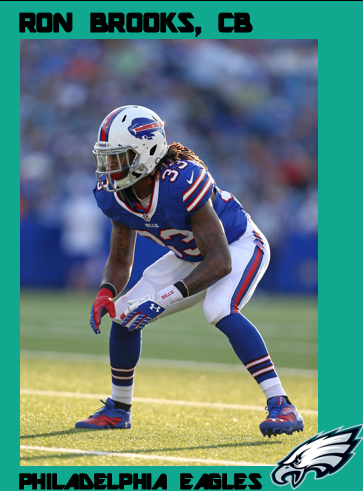 This is a tough one to grade since Brooks didn’t get meaningful snaps last year.

He is, however, familiar with Schwartz and I’m a big fan of good coaches bringing in their guys since there’s almost certainly a proper scheme fit.

The Eagles needed to find better depth at corner, which they have. Now they need a true number 1. 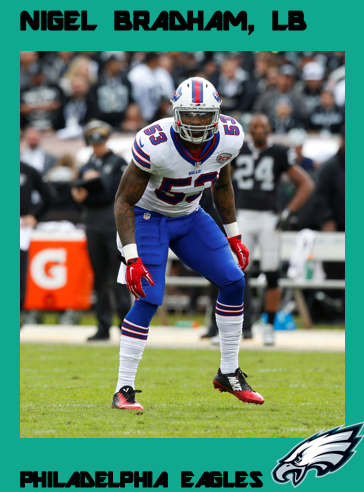 Bradham was among my favorite players available in free agency since I knoew someone was going to buy low on him and get a massive bargain. I also correctly predicted he would land in Philadelphia with his former coordinator.

Bradham should enjoy a resurgence, being back in a system that fits his skill-set best. He’s an absolutely solid tackler whose good both in coverage and against the run. He has solid instincts to go with good-enough athleticism.

He should be a high-volume tackler for the Eagles next year. Likely their tackles leader if he stays healthy. At a little over 3 mil per year, it’s an absolute steal. 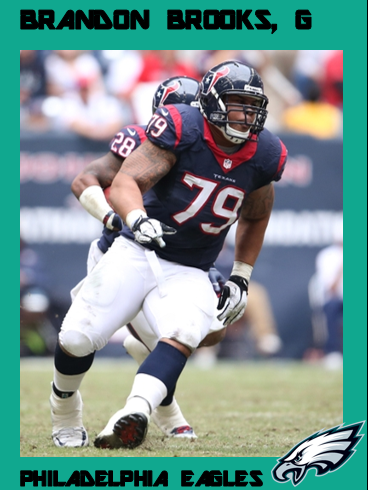 Brooks is a solid guard and only 27 so on the surface, this seems like a solid deal.

This move was, however, clearly dictated by need in a thin market and so the Eagles were forced to grossly overpay for his services.

That much, I do not love. It is good that the Eagles recognize their needs and are continuing to allow themselves more draft flexibility with so many picks.

They are in line to develop a talented roster in the next couple of years.

Daniel is an excellent option at backup for the Doug Pederson-led Eagles.

He represents a major upgrade over Mark Sanchez, who struggles with consistent accuracy and poise. Daniel has all of those in spades and can immediately step in and run the offense effectively.

However, the Eagles overpaid just a bit for his services. 7 mil per year is certainly a premium for a guy that doesn’t have extensive starting experience. Word is he’ll have a chance to compete for the starting job and will likely see time anyway since Bradford is so injury-prone. 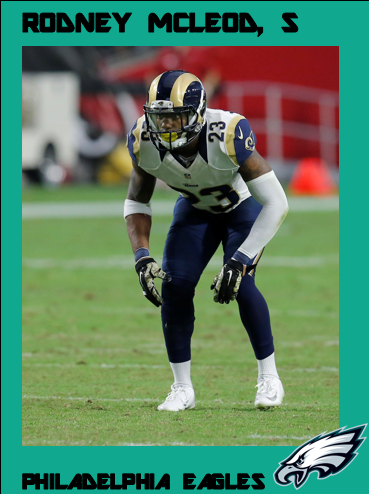 I actually really like this move. The need at safety was pretty large next to Malcolm Jenkins. McLeod is a legitimate starter, grading out as Pro Football Focus’ third best available safety in 1180 snaps last season.

He’s 26 years old, so he should just be entering his prime. This is actually a lot like the Malcolm Jenkins signing from a couple years ago. The Eagles are getting a player that may ascend, and is very unlikely to regress.

The money is a bit too much for him though, I see his value more in the $6 million per year range, but the Eagles did a nice job not getting pushed around by the market. They got their guy and now they have more draft flexibility.

McKelvin may not be an above-average starter anymore, but he can be what Byron Maxwell was for the Eagles in 2015. He’s also coming at a hugely discounted rate.

The main reason for this is that he’s getting up there in age and has some injury concerns, but this is a good move for the Eagles, buying low on a guy who probably has a few good years left.

This should in no way preclude them from drafting a corner, however.

Bradford could potentially be a top 10 quarterback in this league, he showed flashes of that last year and his skill-set suggests it undoubtedly. He’s never fully put it together, but two years hopefully in the same scheme should help Bradford find his footing in the league and show all that talent on the field.

It’s fairly likely Bradford will take that next step, so long as he remains healthy, and even if he doesn’t, inferior players like Andy Dalton and Ryan Tannehill are already getting paid more on longer contracts.

Overall, I’d be surprised if the Eagles end up regretting this, it’s a great situation for a new head coach to walk into, having Sam Bradford in place as the starting quarterback, and it allows the Eagles the flexibility in the draft to fill their needs at the right time and get maximum value from their picks.

Curry could potentially become a special player in Schwartz’ defense, in the mold of Mario Williams. He’s a big man who does great work against the run. He has the power and ability to push the pocket, but hasn’t shown elite bend around the edge, which limits his pass-rush potential a little bit.

Likely, the peak for Curry is a player in the mold of Cam Jordan, which would be fantastic at this price considering Jordan just signed a 12 mil per year contract.

Curry should just be entering his prime at 28, so this contract should span the length of his peak years, he may fall off in the last two years or so, but the Eagles will have the flexibility of opting out by then without too much issue.

Johnson is a physical freak who hasn’t quite put it all together yet. Despite that, he’s one of the best starting right tackles in the league and has the athleticism to get to the second level of a defense.

He may never have the pass-blocking skills to be dominant on the left, but he’s a premium player on the right and should continue to be through the entire length of this contract.

This deal is likely right at market value and it’s always better to spend money retaining your own good players versus dipping into the expensive free agency pool, so the grade gets a little boost.

Ertz could potentially become a top-3 tight end. He has that ability and has flashed it. The Eagles must have reason to believe he actually will make the jump.

Either way, he’s still very young, so by the end of this contract, he may still be in his prime. He’s an ascending player at this time, so paying him a little under 9 mil a year should pay off in the long run.

There’s a possibility he earns that as early as next year. Ertz is a stand-out receiver with all of the physical tools to be an absolute match-up nightmare and has been at times in his career. He needs to be more consistent with his hands, but blocks well and runs solid routes.

I expect this contract to work out in the Eagles favor and Ertz could end up being a bargain. But there is always the possibility that Ertz doesn’t reach his potential and continues playing at his current level (about 6 mil per year).

Celek is still among the best blocking tight ends in the league. I can’t imagine him diminishing in that regard much as long as he keeps up his conditioning.

He’s also still a pretty good receiver for his age and hasn’t regressed much yet. Even if he does fall off a bit, he should still be worth the 4 mil per year and 6 mil total guaranteed.

Keeping him in the fold gives the Eagles probably the best 1-2 punch at tight end in the league. Now they just have to build their receiving corps.

One thought on “Eagles Free Agency 2016”