He had his best pro season in 2013 (along with the rest of that Saints defense) and has been battling injuries and inconsistency ever since.

I suppose the Lions just want an injury insurance policy, and in that role, perhaps Bush could thrive. He was asked to play too often for an injured Jairus Byrd in New Orleans.

The price isn’t too bad either considering how much playing experience and solid snaps he has to his name. He just can’t be relied upon to start for any stretch of time. 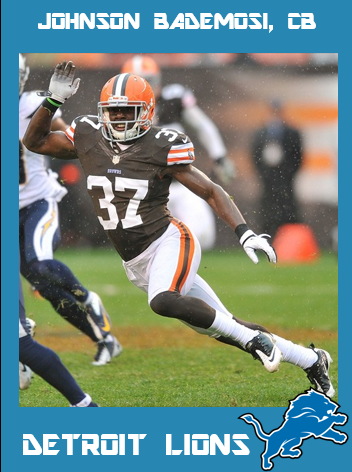 This is a tough one since literally everywhere I look, I see Bademosi referred to as a “special teams ace”.

While that is a seriously undervalued talent in the NFL today, I think teams can find contributors on special teams for the veteran minimum.

Bademosi was pretty bad as a corner for the Browns so he likely won’t help the Lions’ secondary too much. I like the idea here, I just don’t think he’s worth the contract.

While Wilson has just average athleticism, he excels in coverage and is a strong tackler. He offers solid special teams snaps to go with decent defensive snaps.

He’s not a player to be counted on to start, and shouldn’t be expected to for this amount. He’s ideal as a reserve player, especially in light of the recent Rafael Bush signing. The money is actually pretty good here.

Wow. Talk about a hometown discount. Whitehead has a skill-set that is incredibly coveted in the modern NFL (he can actually cover tight ends).

He’s also a solid tackler and a young, ascending player. I loved the Trevathan deal. I think this might be better.

The Lions cupboard is bare at defensive tackle after the roster was gutted a couple years ago so keeping Ngata makes sense.

It’s surprising that they had to pay him this much to stay though, his market must have been hot.

Six mil per year to an aging vet who is regressing is a little much, though the Lions did not totally fail since it’s a short contract.

Don’t get me wrong, this is too much for Jones. He’s an excellent WR2 getting paid like a borderline WR1 which I am not a fan of.

He cannot, and should not be expected, to headline a wide receiving corps, and will not replace the production Calvin Johnson provided, even in Johnson’s later years.

However, he was easily the best available receiver with the most potential, he’s 26 and just had his best season as a pro, and probably will get a bit better before he peaks.

If the Lions draft a receiver high, they could potentially have one of the best young corps in the league, immediately. They just have to understand Jones is not a number 1 guy.

Fuller has solid physical tools and inconsistent hands to go along with plus athleticism. He’s a typical reserve receiver and an ideal special teams contributor.

GM Martin Mayhew remains high on his potential as a receiver so signing him here makes sense. There’s nothing special here, but he’s an interesting developmental prospect. He must develop more consistent hands.

Walker is the type of potential player that typically gets slightly overpaid once he hits the open market.

The Lions were very smart to retain him before that happened and thus got far under market value for him.

He’s a solid all-around player who hasn’t quite reached his potential yet. He’s fast and shows pass-rush ability from his spot on the line, offering quality depth in the Lions thin D-line rotation.