It’s becoming clear that Raiders brass recognizes their needs, which is encouraging.

They’re also finding some really solid options to fill their holes. The main issue I have is paying a corner $10 million a year. It reminds me of a few years ago when the Cowboys did the same thing with an ascending Brandon Carr.

That move helped get them into a cap mess they’re still working out of and Carr in no way lived up to the contract. I’m not saying that will happen, but it’s tough for a corner to earn $10 million a year, especially one without a penchant for turnovers like Smith. 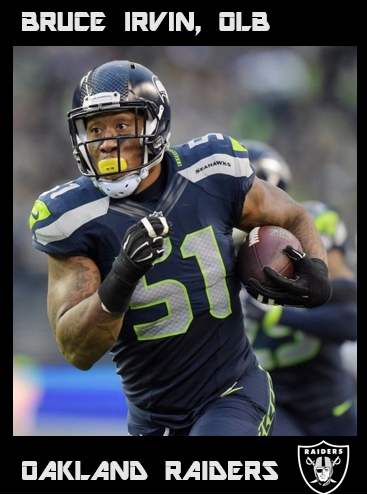 Irvin is not a game-changing linebacker, and although this was a position of need, the Raiders overpaid here.

There is very little chance Irvin lives up to over $9 million per year. The saving grace on this one is the low guarantee number which would allow the Raiders to essentially opt out after the 2016 season since the guarantee is completely front loaded.

That’s a good plan by Raiders GM Reggie McKenzie. Still, as it stands, this is too much for a marginal starter.

This is another case of the Raiders overpaying, big-time.

The key here is that the buzz says the Raiders see Osemele’s value at tackle. That is not where his value lies, as he is just an above-average left tackle.

He is a dominant guard, however, and it’s possible Raiders brass will recognize that and play him accordingly.

Unfortunately, paying $11 million a year to a fringe starter at tackle or a dominant guard, regardless, is too much money. Like the player, but the numbers don’t work for me.

Somewhat undersized for his position, Toomer is an athlete at the second level of the defense, and a solid special teams contributor due to that athleticism.

He has not made a meaningful impact yet on defense, but logged a few snaps with the starters last season, the first of his career.

It’s always good to keep your special teams guys, but if you’re the Raiders, you have to hope this guy can give a little more to the defense.

Holmes has a nice height-weight speed combination, and was a UDFA in the 2015 draft.

He’s worth a roster spot, as one of those basketball-players-turned-tight-ends that everybody seems so crazy about these days.

Harris is a guy that slipped in the 2014 draft due to character concerns and tweener traits, but shows a good skill-set and long-arms to help him keep distance from opposing lineman.

He’s played in just seven career games since then, and hasn’t shown much. He did come on strong against the Packers in week 15 with 5 tackles, so there’s intriguing potential here.

Autry is a big man, officially listed 6’5, 270 lbs. A UDFA out of Mississippi State, Autry has improved every year he’s been in the league.

Last year, in 14 games, he logged 3 sacks and a safety to go with 22 total tackles. He’s got versatility as both a solid pass-rusher and run-stopper.

There’s a lot to like about this young man, so keeping him in the fold is a great thing for the Raiders.

Roberts exploded onto the scene in 2015, becoming a favorite target of QB Derek Carr early on. He beat out Brice Butler, Josh Harper and others in a crowded receiver competition to win the fourth receiver job.

Still later in the season, Roberts gained the third receiver job as he continued to be more and more a part of the game plan. He shows excellent route running and hands to go with play-making ability on contested catches.

Keeping this guy on can only help the Raiders, and in a market where everybody and their mother getting overpaid, this is highway robbery.

One thought on “Raiders Free Agency 2016”