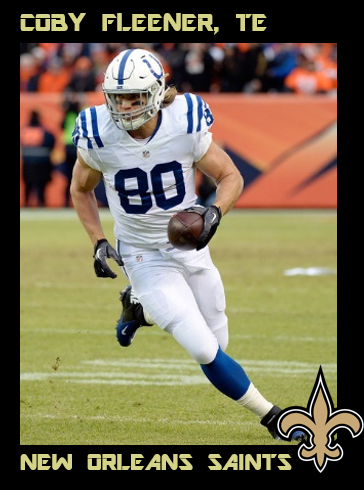 This is reportedly a back-loaded contract, which I’m not a fan of.

However, the Saints are clearly attempting to still make a run with the couple of years Brees has left, so the deal makes sense.

Fleener is a smart guy, and should pick up the complicated Saints offense quickly. The Saints just turned Ben Watson into a highly productive tight end at 35 so I expect Fleener should be able to produce similar numbers and for a longer amount of time.

A little over 7 mil is a lot. But it’s likely the going rate for top tight ends in a starved market. Fleener is almost certain to live up to the contract due to the way Brees and Payton use tight ends.

I like this one a lot. McCown played well in place of an injured Brees against an excellent Panthers defense early in the season.

He shows a very good understanding of Payton’s complicated system and often identified the right target and threw it accurately.

At $1.5 million a year, the Saints are getting their ideal backup. Sounds good to me.

Kelemete earned this contract with his versatility. He can start on any spot on the line, he even filled in as a left tackle for a game.

Still, he wasn’t consistent enough to earn the full-time job at left guard. He was outplayed by Tim Lelito for that spot and is somewhat of a liability as a pass blocker.

This contract may be a bit rich for his skill-level.

In his second go-around with the Saints, Cadet really came into his own, playing especially well as a receiver out of the backfield.

He offered an excellent change of pace for the Saints, playing the role C.J. Spiller was expected to play for less than one quarter the price.

He figures to do more of the same in the coming season, and there’s no risk either way.

Wilson was actually one of the most consistent members of the Saints secondary. He was a bit overly aggressive and wracked up some untimely penalties, but showed solid mirroring skills.

He’s also feisty in run support and offers position versatility as a fill-in safety, saving the Saints a roster spot. This is a fantastic deal, and he’ll remain the Saints secret for at least another season.

This literally can’t be for more than the vet. minimum. If it is, I’ll be stunned.

As it stands, Forbath was decent for the Saints last year in relief of the disastrous Zack Hocker. The kicking competition in camp should be interesting.

If Scobee’s back to full health, Forbath has no shot, but there’s no risk, so I like it.

There is no risk in signing Scobee, who had a very solid career with the Jags before stinking it up in Pittsburgh.

Word is he was dealing with a hip issue and that could have contributed to his poor performance.

Obviously Saints are hoping he returns to form, and if he does they’re set at kicker for years. If not? Dump him for no money down.

One thought on “Saints Free Agency 2016”