Jones is being hailed as a top prospect on the level of Marlon Humphrey and Marshon Lattimore, and I think people are overlooking some deficiencies.

Jones gets a lot of credit for not giving up touchdowns, and keeping plays in front of him, but struggles with closing speed on timing routes against good route runners. He is especially susceptible on tape to one of the most basic routes: the 10 yard hitch. Quarterbacks tended to shy away from testing him in college, but this aspect will be exposed in the NFL.

There are many things to appreciate about Jones game though, starting with his confidence. He plays the game with the mentality that he’s better than you, and it clearly intimidates his competition. His loose hips help with his exceptional mirroring ability in coverage, though he seems to have a lot of wasted movement that needs to be cleaned up by NFL secondary coaches.

Jones also has exceptional physicality in both the passing game and run support as a tackler. Watching the tape, the word that comes up again and again for him is feisty. While I believe Jones will struggle early in his career, he has pro bowl potential as a reliable number one corner.

Diagnosing in the pass often helps Jones to be in the right position, as evidenced by the fact that he’s thrown against so seldom despite there being NFL talent all over the Washington secondary.

I have my concerns about Jones’ burst in particular, as he is often burned by sharp cuts. He is also unable to keep up on deep crosses at times, and uses bail technique constantly to prevent big plays.

It’s clear that Jones is a natural in reading even the most experienced college receivers, as he reacts immediately and often anticipates route changes.

This is an area that concerns me with Jones, though it is not necessarily a weakness.

There isn’t much zone to review on tape for Jones, but some of his skillset would seem to translate well to zone coverage. Some of his less impressive plays were in zone though, and his pursuit is concerning.

Jones loves to mix it up and hang in the receiver’s hip pocket off the bump, it’s where he’s at his best.

He can get moved off his spot, but once he engages, he consistently brings the ball carrier down or out of bounds.

This is an area where I’d like to see a top prospect earn top marks, but it’s by no means a weakness, Jones has some exceptional plays on the ball on tape, but several missed opportunities as well.

Can get moved off his spot, but is exceptional in run support at bringing an end to the play prematurely.

Play Recognition: 4 out of 5

Most of his diagnose is solid, and he has some impressive reads on tape.

Jones is clearly eager to be active all over the field and this extends in a very noticeable way to his run support.

Jones sustained an Achilles tendon tear while running the 40 at his pro day, putting his 2016 season effectively on ice. This could be an injury that affects his career going forward as Jones relies heavily on his sudden explosiveness. 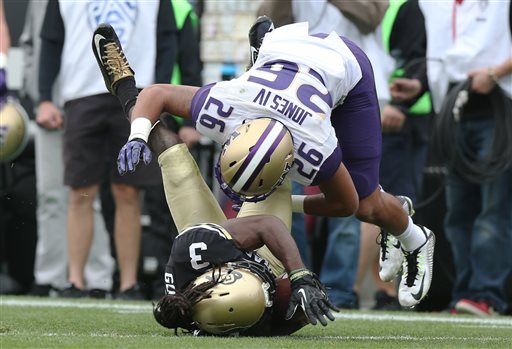 Colvin was far less touted coming out of Oklahoma, but proved to be an incredibly reliable cover corner that excelled as a run supporter, peaking in 2016, his fourth year in the league. Jones possesses a similar skillset with his ability as a run defender to go along with his incredibly confident play in coverage. Like Colvin, I expect Jones to take a few years before settling in as a solid starter.