The Chiefs came into week one with one of the toughest tests in the AFC, playing against a stacked, veteran squad led by the perennially underrated Philip Rivers and the ferocious pass-rushing duo of Ingram and Bosa. Even before the game was played, one of those three factors was erased with Joey Bosa’s foot injury forcing him to miss the game. It’s arguable just how much that loss affected the outcome of the game, but it has to be noted that the Chargers pass rush was significantly less effective in a game that was much closer than the ten-point spread indicated.

On the other side, the Steelers struggled to get anything going offensively outside of the consistent ground attack of James Connor against a highly talented Browns defense. It wasn’t too big of a surprise, what was a surprise was how streaky Roethlisberger was, considering he paired three bad interceptions with a poor completion percentage (56), touchdown number (1) and a solid yardage mark (335). His Total QBR of 22.8 showed a player that mainly struggled against a tough challenge. What that means going forward into the season, and especially into week 2 against a much weaker Chiefs defense remains to be seen.

Ultimately, the key to this game is number ten of the Chiefs. If Tyreek Hill can be as effective this week as he was last week, the Steelers will struggle to keep up in a track meet. If the Steelers pool their resources into stopping Hill, logic and a look at the Chiefs skill positions suggests that the production could come from elsewhere, with Travis Kelce, Kareem Hunt, Spencer Ware, Sammy Watkins, Chris Conley, DeAnthony Thomas and DeMarcus Robinson all capable of breaking out if given the opportunity.

Of those options, Hunt appears to be the most likely beneficiary of the extra attention Hill will warrant, Stretching a Steelers defense vertically which already struggles in the middle with the subpar linebacker play is a strategy the Browns already successfully employed in week 1. With an even more potent downfield passing game from the Chiefs, it’s hard to imagine the Steelers being able to reign in Hunt if he finds a few creases.

However, the Chiefs offensive line is not very good. The 7 qb hits allowed and 3.9 ypc the Chiefs were able to rack up in week 1 are much more indicative of the Chiefs skill on the line than the only one sack allowed. Mahomes’ mobility obviously offsets some of these potential struggles in pass protection, but the poor protection will yield more sacks going forward and that could start this week against a team that racked up seven sacks and 12 qb hits.

The Steelers D-line in particular has a decided advantage, with the front three of Stephon Tuitt, Javon Hargrave and Cam Heyward challenging the thoroughly underwhelming Chiefs trio of Andrew Wylie, Mitch Morse and Laurent Duvernay-Tardiff. That could clog run lanes, which will make it hard for Hunt to get going at the beginning of runs and offset the relative weakness at the linebacker level. Expect plenty of tackles for loss for the Steelers, and some splash runs from Hunt to form an overall respectable stat line, similar to that of Ezekiel Elliott last week against the Panthers. 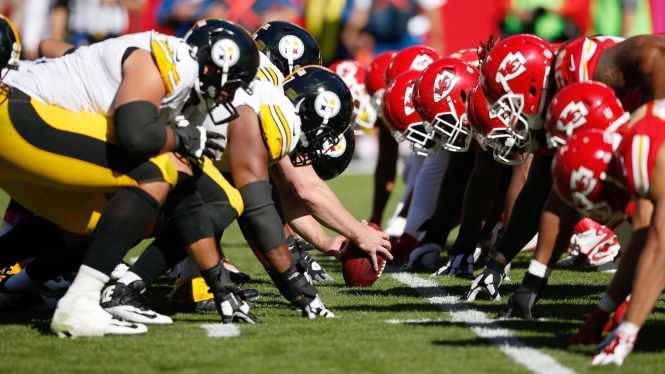 Of course, the X-factor here is Mahomes, and breaking down his spectacular 2018 debut is the key to understanding how this matchup might play out. While Mahomes was excellent at extending plays and downfield passing, he struggled with chemistry to any receiver not named Hill, and it was especially concerning that he couldn’t get all-pro tight end Travis Kelce involved. Take away the deep pass completions (20 plus yards), and this is Mahomes’ stat line: 10 of 22, 78 yards, 2 TD and a sack. In the first half in particular, he was a putrid 4 of 11 for 23 yards and a sack outside of the 20-plus yard pass completions. It should be noted that the 2 TD’s were on one-yard shovel passes, so they were essentially handoffs. All of this is not to take away from Mahomes’ performance as he was an incredible 5 of 5 for 178 yards and 2 TDs on throws 20 yards or more down the field, it’s to show that some of the essential aspects of being an NFL QB (short and intermediate accuracy) are areas where Mahomes continues to struggle.

On the other side, while Roethlisberger struggled in week 1, it was against a vastly superior defense from top to bottom. The fact is, the Chiefs just allowed a comparable quarterback in Philip Rivers to throw for over 400 yards, and that includes a bad drop from Travis Benjamin that would have been a TD of over 50 yards. There will be room for Roethlisberger to throw it down the field, where the only player that could potentially hang with Antonio Brown is Chiefs corner Kendall Fuller. However, that leaves Juju Smith-Schuster, Justin Hunter, and perhaps rookie James Washington free license to tear up the relatively weak Chiefs secondary. 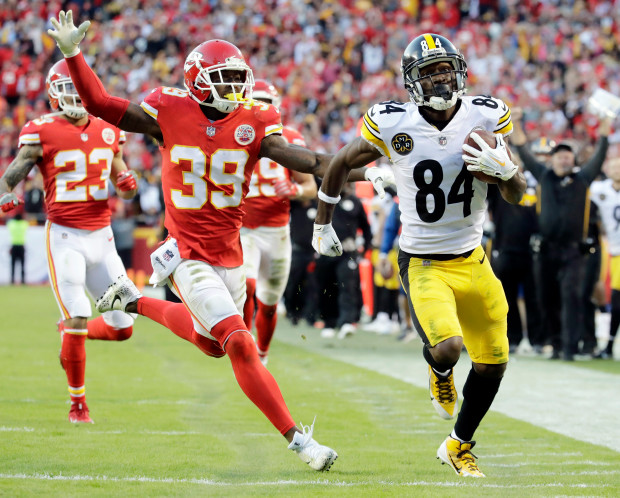 This is a game script that could look like a track meet at times, but the inefficiencies for both offenses should get in the way and keep it relatively reasonable. I expect the inexperience of Mahomes and the Steelers’ advantage in the secondary and the trenches to offset the potential strong running game that Kareem Hunt could enjoy. It will be close, but the Steelers will roll towards the end.

As always, drop your slant in the comments section by hitting the “Leave a Comment” button at the top of the article. If you enjoyed, find us on Facebook and Twitter, links below: