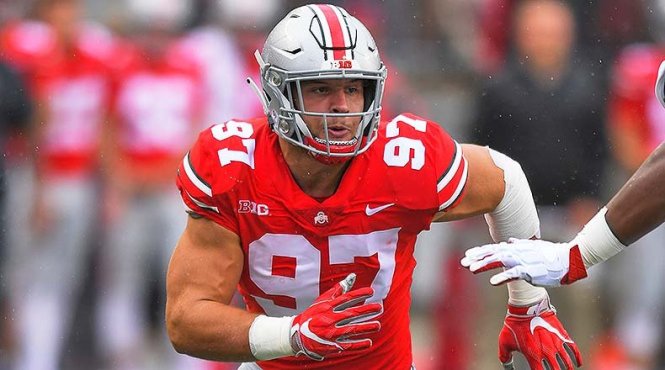 Bosa has the same relentless effort and superior hand technique his brother has. He is a player that pops on tape numerous times with second, third and fourth effort sacks. His ability, willingness and patience setting the edge in the run game is also very impressive for such a young prospect.

Bosa will benefit from an NFL weight room, as he is sometimes beaten at the point of attack, and needs to build up steam to win with power in both pass rush and run stop situations. He intelligently handles double teams by using his superior speed, hand usage and leverage understanding to win, where brute strength is lacking.

His technique, tool box of pass rush moves, and diagnosis ability vastly improved from 2017 to 18. His game tape against Oregon State is easily his most impressive, but even in that one he shows his tendency to be fooled by reverses. This facet will need to improve with the increase in dual threat QBs that is sweeping the NFL.

Bosa prefers finesse moves, like the swim and rip, but also developed usage of a spin move as his career progressed. He also flashes bull rush, as well as quick and explosive lateral moves.

This is an important part of Bosa’s game as he uses this to mask his slight deficiencies in play strength. He shows a superior understanding of the minutiae of the position, but can get in trouble as the game goes along and he gets more tired.

Though it doesn’t happen often on tape, Bosa shows the bend reguired to run under a table sideways at full speed, which is crazy considering his size and frame.

Bosa always either gets the sack or affects the QB when he has the opportunity, it’s the most impressive part of his game.

Second most impressive, and most similar to his brother, Bosa hustles all over the field, hunting the ball with reckless abandon.

While Bosa boasts an elite toolbox and skillset, he can disappear in pass rushing snaps, usually due to extra attention by larger linemen.

Bosa shows extreme discipline and patience in forcing runs inside where the help is, but there were a few instances on tape where he jumps inside and loses contain as a result.

I don’t recall any one-on-one missed tackles on tape, but Bosa doesn’t have many as he’s often mixing it up in the middle and has swarm tackling help from his active defensive teammates.

This is the way to win against Bosa in the run game, if he doesn’t win with agility, he can get washed out. He’s quite good at masking this most of the time, but NFL OC’s will be able to exploit it.

This is perhaps his biggest weakness, and it has majorly improved in his most recent tape, Bosa showed a tendency to jump laterally at the line in order to have a free penetration into the backfield, but both running backs and quarterbacks were able to outrun him in many of these situations. This is by no means a negative area of his game, however, he is still often very disciplined, there are just a few glaring examples on tape.

Bosa can get washed out of plays, but very often positively influences them with his leverage and technique.

Despite the injury that prematurely ended his career at Ohio State, Bosa has shown no indication that injury problems will plague his NFL career, he also has no character concerns. 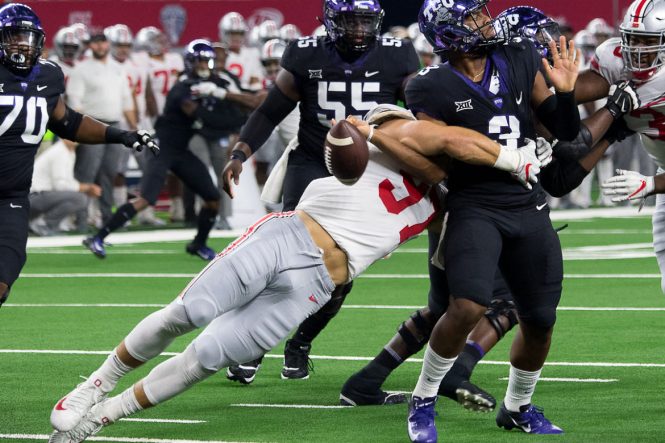 The relentless motor, edge setting ability, and similar size with tendency to take false steps against reverses are areas these two players share. Lawrence is a much stronger player, but didn’t come into the league that way and was a bit of a late bloomer. Bosa could have similar struggles early, especially if asked to be the sole provider on defense as a rookie. However, he has the toolbox and natural athleticism to be a top player at his position at some point.

As always, drop your slant in the comments section by hitting the “Leave a Comment” button at the top of the article. If you enjoyed, find us on Facebook and Twitter, links below: